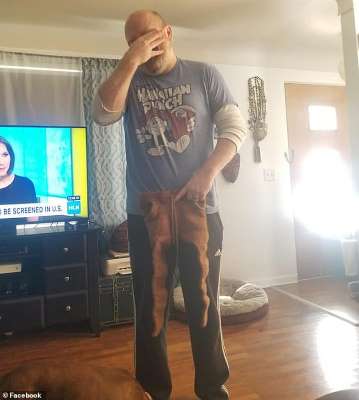 A disgruntled wife has attempted to ‘sell her husband’ for $111 on social media after he accidentally shrunk her designer trousers in the dryer.

The woman, who is from Freeland, Michigan, purchased the $199 Kimbo knitted pants from Australian made Spell Designs in hopes of pairing them with similar bohemian threads.

But sadly her ‘favorite’ tracksuit bottoms have become unwearable after her kindly partner tried to wash them himself, turning them into the ‘size of a four-year-old’.

A photo of her man was shared to a Facebook group looking ashamed of the pants, which he held up to his own legs for comparison.

Women in the group were quick to sympathize with the problem at hand saying they had banned their own husbands from washing their clothes.

‘My husband is also banned from washing anything of mine after washing and throwing a very expensive and much treasured silk shirt in the dryer,’ one lady said.

‘I think you are going to have trouble selling him,’ said another.

One woman did look on the brighter side and said ‘at least he was trying to do the washing,” but some said a shrunken pair of trousers wasn’t worth the well-meaning gesture.