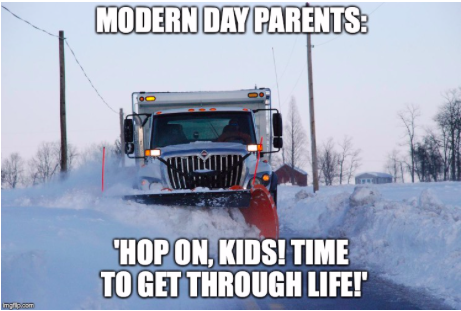 You’ve heard of helicoptering. Parents who hover too closely over their children.

Now in this age of anxiety and uncertainty, a new parenting style has emerged called snowplowing. It refers to parents who will do anything and everything to remove any and all obstacles for their children rather than prepare their kids to overcome obstacles themselves.

Now, one woman is teaching families how to create success on the child’s terms.

A new college freshman, Patrick Ward proudly wears the colors of the University of Vermont. Getting in was all his doing, and in an age of over-anxious parenting, that’s a big deal.

“I know a lot of friends whose parents were watching their every move,” Ward said.

That’s one form of snowplowing. Mom and dad are so focused on their children succeeding that they remove any obstacles in their path, even eliminating any hard decision their child has to make by making it themselves. The extreme version of it made recent headlines with the college admission scandal.

“I think early on we were probably more snowplow than not,” said Jim Ward, Patrick’s father.

That’s when the Wards turned to educational consultant and best-selling author Homayoun. She shows students how to achieve success on their own.

“Our focus is really helping students identify what are their own goals for themselves personally and academically, how are their daily habits moving them toward those goals or away from those goals,” Homayoun said.

The hard work has paid off. Patrick Ward got a near-perfect score on the ACT test.

“When you have high expectations and high belief in your child … they rise up to those expectations,” Homayoun said.

While snowplowing should be avoided, Homayoun does urge parents to be aware of their children’s daily habits to be sure they are in line with their goals.

For instance, by being distracted by a phone or computer, homework assignments will take longer than they should. Keeping them focused by limiting their online activity, can actually give teens more free time in the long run.

It’s important to provide the time, space and structure for kids to do their work.