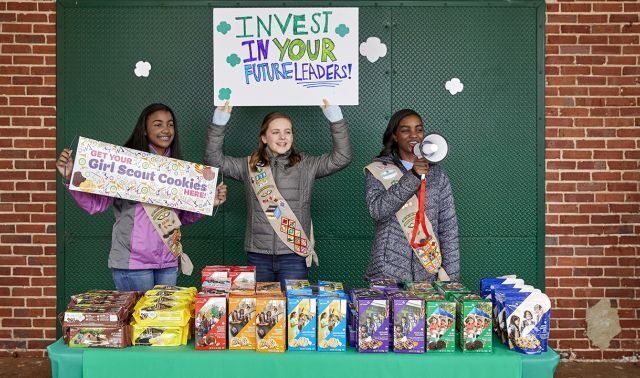 Everyone knows not all of the highly-coveted Girl Scout cookies are created equal, and the youth organization for girls has a ranking of the best selling cookies on its website to prove it.

Turns out, the round, mint-flavored cookie, known as Thin Mints, claimed the top spot on the Girl Scouts cookie hierarchy with Samoas, also known as Caramel deLites, coming in at number two.

Tagalong, the chocolate-coated peanut butter cookie also known as Peanut Butter Patties, ranked as the third best-seller, according to the organization.

The highly regarded cookies are made from two different bakeries, ABC Bakers and Little Brownie Bakers, so the look, taste, packaging, and name of each cookie may differ slightly depending on where you buy them, according to the Girl Scouts’ website. Each of the 11 Girl Scout councils across the nation determines which bakery they partner with, which means you may be getting a different recipe than your fellow cookie fanatic.

Regardless, the cookie empire garnered impressive sales in previous years despite only being offered for a brief six to eight-week span. Each year, more than one million Girl Scouts across the nation sell roughly 200 million boxes, generating roughly $800 million in profits, according to a 2018 Fortune report.

The question remains: Did your favorite make the list?

The Thin Mints, created by ABC Bakers, are crunchier with a heavier mint flavor in every bite, according to the Los Angeles Times. Meanwhile, Thin Mints created by Little Brownie Bakers have a richer chocolate coating to them and a more “distinct” peppermint taste, the outlet reported.

The Caramel deLites, made by ABC Bakers, have less caramel and more cookie compared to its counterpart. So if you want a richer flavor, you may want to search out for those Samoas. The cookie, made by Little Brownie Bakers, sports a heavier caramel, dark chocolate and coconut layer, the outlet reported.

Peanut Butter Patties, made by ABC Bakers, have a lighter peanut butter layer with a vanilla flavor. In comparison, the Tagalongs, which are made by Little Brownie Bakers, are fueled with more peanut butter layers, according to the outlet.

The Shortbread cookies are made by ABC Bakers and have a sweeter “almost vanilla” taste to them, the outlet said. In comparison, the Trefoils, made by Little Brownie Bakers, taste “buttery.”

And just like their taste, the price of the boxes also varies depending on the region. Each of the Girl Scout councils set prices for the cookie boxes based on its needs and knowledge of the local market, according to the Girl Scouts website.

“Each council determines its own revenue structure depending on how much it costs the council to buy cookies, the local retail price to sell cookies, and the amount of revenue shared with participating troops,” the Girl Scouts website explains.

The proceeds from each sale fund the troop’s activities for the year as well as community projects led by the scouts.

6 hours ago
Connect With Us Listen To Us On