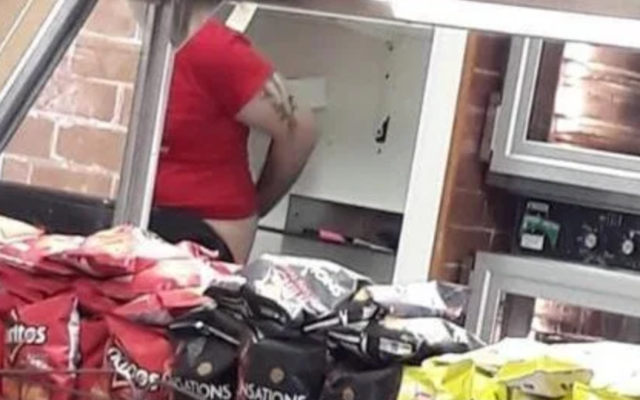 A ‘disgusting’ Subway worker was caught with his pants down – having a good old scratch of his left cheek behind the counter, which was lewdly on show.

Horrified customers spotted the grim sight at a branch of the sandwich chain in Accrington, Lancs.

An unnamed 30-year-old spotted the bottom-scratcher and posted it to Facebook.

The picture, showing the worker with his face obscured, was posted on Monday alongside the caption: “Glad I don’t eat at Accy Subway. Worker stood scratching his a*s!”

The spotter told the Lancashire Telegraph: “It is absolutely disgusting and I won’t be going into that Subway again. I said to my partner, ‘have you seen that? You have just eaten and he is doing that.’

“It is just wrong on so many levels”.

The post attracted a slurry of comments from grossed-out sandwich lovers.