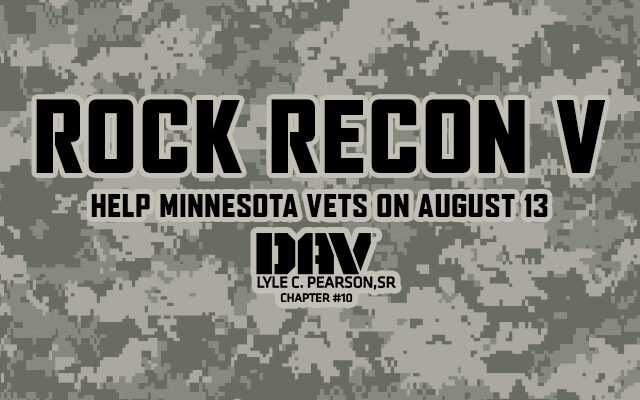 Rock Recon 5 for DAV is ready to roll with Rock 95. Once again we’ll hit the road in support of DAV MN Chapter #10, LYLE C PEARSON SR.  On Saturday, August 13th live from 7am-7pm. Powered by Fromms Auto Repair, Scheels and Grain Belt Premium.  Along the way we will collect donations for DAV MN.  We’ll pick up special guest speakers and we’ll have bands playing at the Eagle Lake Legion all afternoon. Plus we have your chance to win one of four Outdoor shopping sprees from Scheels All Sports in Mankato.

SPECIAL THANKS TO THE AMERICAN LEGION RIDERS CHAPTER #37 FOR BEING OUR ESCORTS!

Rock Recon V is looking for area ribbers to compete in the first ever Cook Off Contest from Hyvee Mankato.

On Saturday, August 13th at the Eagle Lake American Legion parking lot. Area chef’s will compete in three categories, Ribs, Chicken and Sweet Corn. Our panel of certified BBQ Judges will select the winners, plus we’ll have a fan favorite category too. This is a 100% payback contest. Come and compete in this first ever Cook Off Contest in support of DAV Minnesota Chapter 10 Lyle C Pearson. Entry fee is $100 and the meat and corn are provided.  Get signed up today at mankatosrock.com. The Rock Recon V Cook Off Contest from Hyvee, Saturday, August 13th at Eagle Lake American Legion Post 617.

To compete in the Cook Off contest please fill out the information below. This contest will be limited to about 14…

Connect With Us Listen To Us On