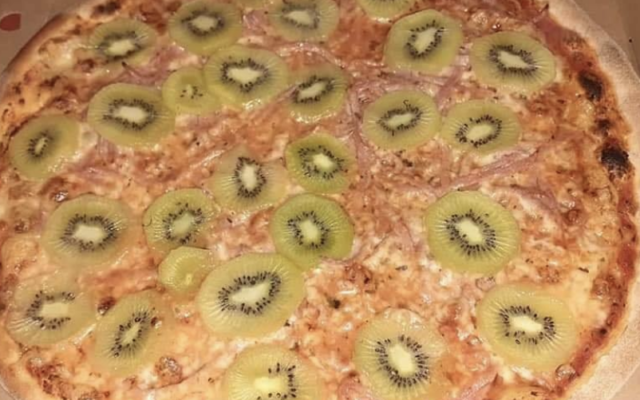 Thought pineapple on pizza was putrid? Enter kiwi pie, the latest fruit-festooned Frankenfood to spark disgust from pie-hard traditionalists across the Redditverse.

A viral photo of the “Kiwizza” was uploaded Sunday by Redditor nre1313 with the caption “Kiwi pizza from a Danish pizzeria, an unholy abomination.” Indeed, as the photo shows, the standard tomato-and-cheese base is freckled with bizarro pepperoni-style kiwi slices.

And just like its pineapple predecessor (which became so maligned that Iceland’s president wanted to ban it), the fuzzy fruit topping shares its real estate with what appear to be pieces of ham.

Needless to say, social-media justice warriors were not pleased with the pie-brid.

“Scandinavian food is the best argument for the existence of Satan I have ever seen,” scoffed a Reddit comment-section gastronome. “A new evil has dethroned pineapple and its name is kiwi,” lamented another of the culinary chimera.

“And I thought the Swedish banana pizza was bad,” mused one Redditor in reference to another similarly off-putting Scandinavian pairing.

Some, however, were more optimistic. “I mean, this particular pizza looks bad, but i kinda want to try the combo,” said one adventurous eater. “If pineapple goes great on a pizza (imho) then I would not mind tasting pizza with kiwi,” said another.