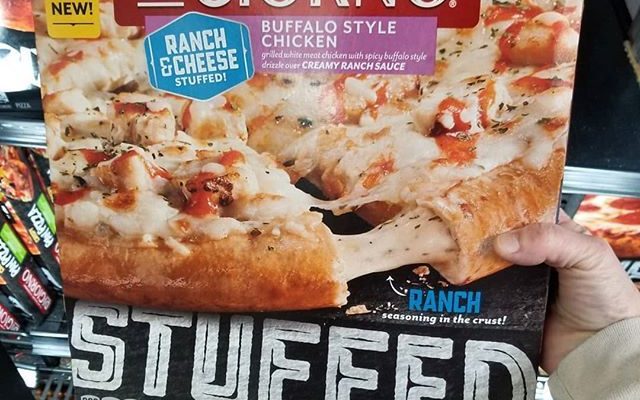 It’s still football season, in case you haven’t heard, and the Super Bowl is coming up faster than you probably realize. It can be pretty exciting, especially if your team is in the running for the Big Game (good for you!!) but it can also be pretty stressful if you’re planning on hosting. After all, we literally just had a bunch of cooking and eating holidays, can’t you just catch a break? That’s where some delicious shortcuts can come in to help you out, especially frozen foods like this DiGiorno Buffalo Chicken Pizza.

This new pizza is part of the brand’s stuffed crust line and it definitely deserves a place at your tailgate table. It’s topped with grilled chicken, spicy buffalo sauce, as well as ranch. But that’s not all…I did mention it’s stuffed crust. But it’s not just any stuffed crust! It’s stuffed with cheese, sure, big deal, but it’s also stuffed with RANCH SEASONING. Honestly, just give me your extra crust. It’s all I want.

Instagrammer @FoodieWithTheBeasts spotted this guy at Walmart alongside the brand’s other stuffed-crust pizzas like pepperoni and supreme styles. Those are only stuffed with cheese though, so ya know, no biggie. Maybe those can come along too, but we all know who the true star is.

If you’re interested in picking up the Buffalo Chicken Stuffed Crust Pizza, you can take it home for about $7.48 at Walmart.