104-Year-Old Marine Veteran Asking for Valentine’s Day Cards: ‘I’ll Save Every One’ 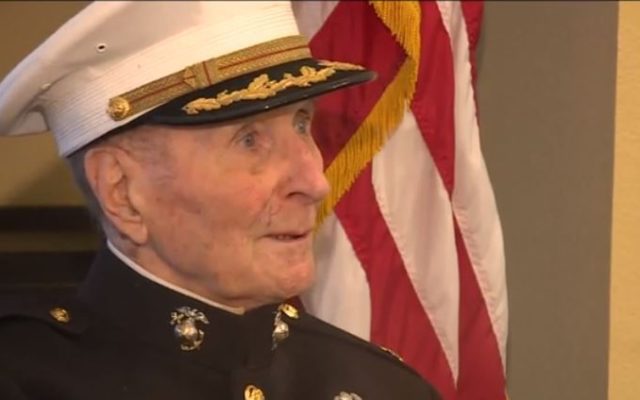 Maj. Bill White served in World War II, survived the Battle of Iwo Jima and went on to continue a long career in the U.S. Marine Corps.

White keeps his proudest memories tucked away on his bookshelf and the 104-year-old veteran said he’s hoping his collection grows a little bigger this Valentine’s Day.

Among his many medals is the one he’s most proud of — his Purple Heart. It is a badge of honor for surviving the Battle of Iwo Jima.

“The fact that I even survived is something. There weren’t too many of us,” White explained.

On March 3, 1945, Maj. White led his Marines toward the front lines under heavy fire from Japanese soldiers.

“When I was wounded, I didn’t have any choice in the matter. A grenade blow up about 6 inches from me,” he said.

His injuries may have taken him off the battlefield but his fighting spirit carried on in life.

The California native spends his days dining with his friends in Stockton, staying active and scrapbooking, which is one of his favorite hobbies. He keeps a lifetime full of memories carefully preserved on the bookshelves in his room, each organized by year.

“It’s kept me busy just trying to locate or keep track of what’s happened to me, where, when,” White explained.

For Valentine’s Day, White said he wants to add to his collection with cards from people near and far.

“I’ll save every one of them like I’ve been saving little things that have come up until right now and they’ll be a personal part of my history,” he told KTXL.

And it is a life story that is still being written. White said the secret is to “just keep breathing.”

“I can’t think of anything else. I can give you all sorts of ideas and suggestions but if you’re not breathing, they don’t mean anything,” he said.

If you would like to send White a Valentine’s Day card, you can address it to: